Evans Crary Sr. Bridge is a road bridge, box girder bridge, and prestressed concrete bridge that was begun in 1998. The project is located in Stuart, Martin County, Florida, USA. A balanced cantilever design was revised to a span-by-span segmental design with near-record spans of 180 feet for the Evans Crary Bridge crossing Florida’s St. Lucie River. 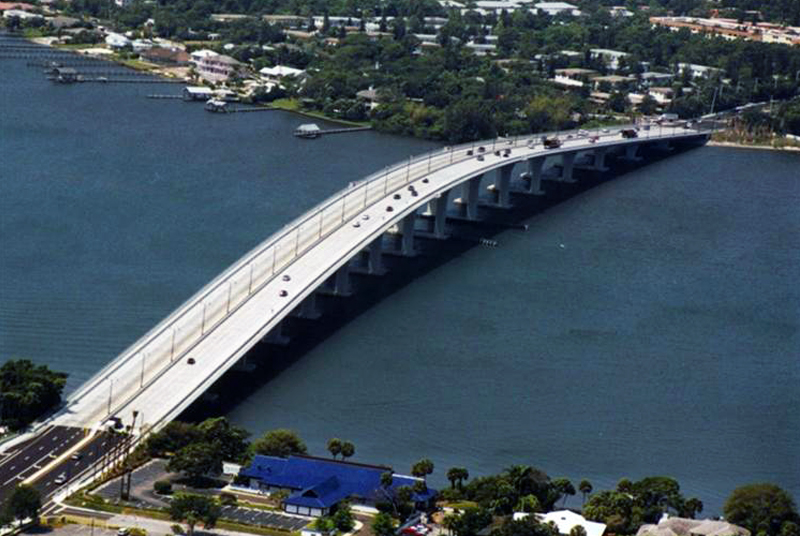 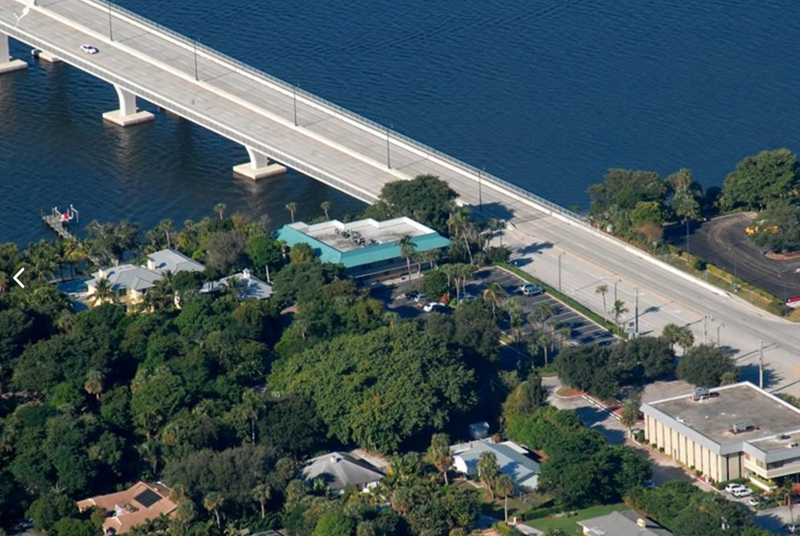 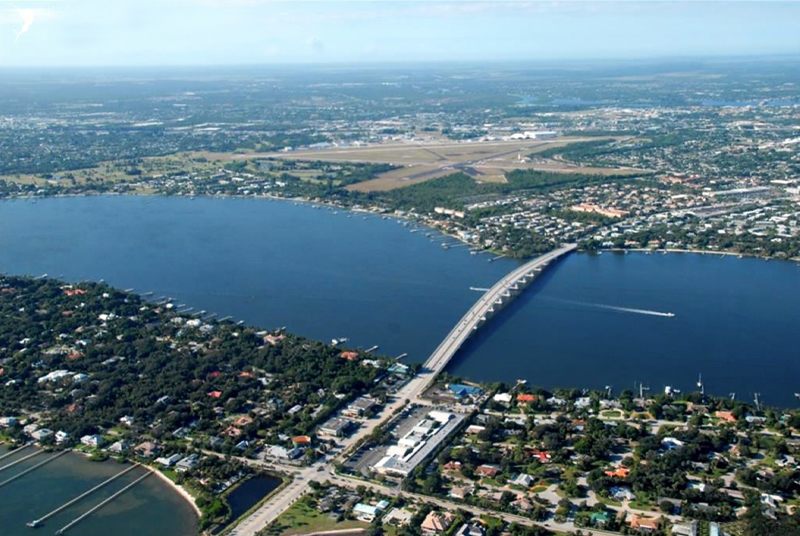 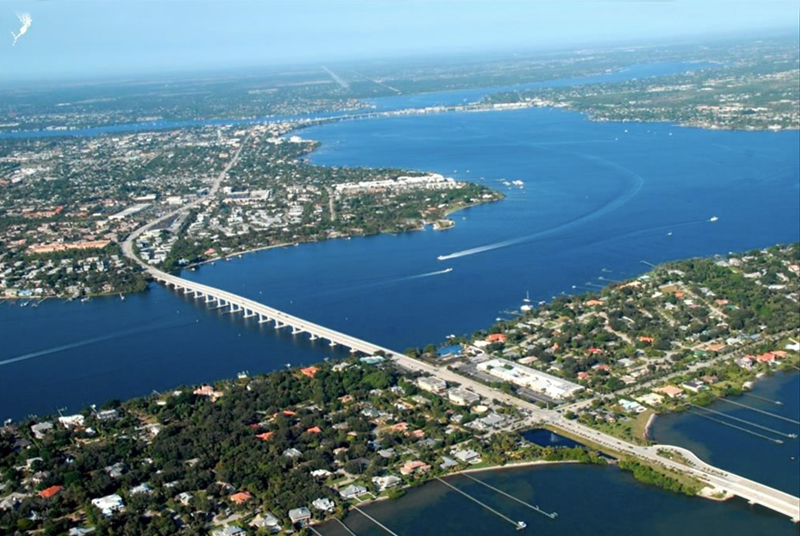 The bridge’s twin, precast segmental structures are 15.044 meters wide, 909 meters long, and are separated by a 450-mm gap. Rising at a vertical grade of 5.2%, the bridge provides a 19.885-meter vertical and 27.440-meter horizontal clearance over the St. Lucie River. It is continuous from end to end with no intermediate expansion joints. The box girder is a constant 2.45 meters deep. The center foundations were designed for a 9,700 KN ship impact load, using a common footing for both structures where the ship impact load is applied. The piers are cast-in-place with a flared top. 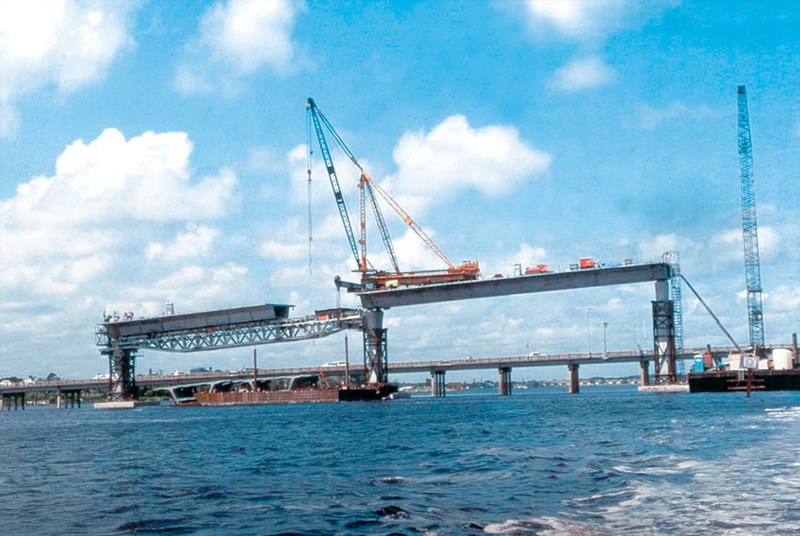 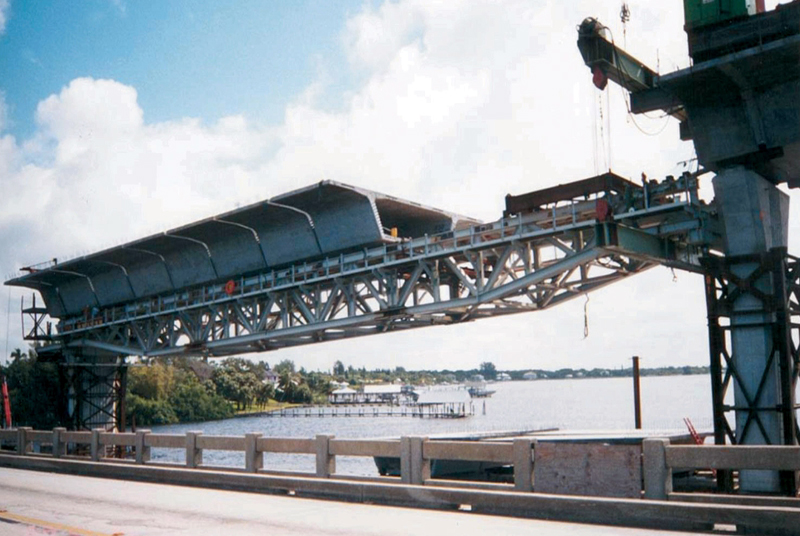 Remarks: The project set a record for the longest bridge in the western hemisphere to be built using the erection method.

FTBA Winner for Best in Construction, Major Bridge, this twin, precast segmental bridge project for the Florida Department of Transportation is 3,000 feet in length and spans 65 feet above the St. Lucie River in Stuart, Florida. The new high-level fixed span bridge replaced the existing low-level Bascule Bridge that had become structurally deficient. With 17 separate, 180-foot spans erected in the span-by-span erection method, the project set a record for the longest bridge in the western hemisphere to be built using this technique. The project won the 1999 National Value Engineering Award for the most innovative proposal during construction.

Three main restrictions for the bridge’s redesign were:
Box girder section. One of the restrictions for the redesign was that the aesthetics could not be changed. Therefore, the construction team did not revise the exterior dimensions of the cross-section. The original design used varying web thickness and a varying bottom slab thickness. The team selected a constant cross-section for the span-by-span redesign. Then, they reduced the web thickness since draped tendons that would reduce the shear force carried by the webs would be used with the span-by-span construction. Since the cantilever tendons anchoring in the top slab were eliminated, the thickness of the interior haunches was also reduced.

Post-tensioning. The original design was based on straight cantilever tendons and continuity tendons. The redesign used draped external tendons that extended the full span length and were internal to the bottom slab in between deviation points. It also used straight internal tendons in the top and bottom slab that extended the full span length and internal tendons in the bottom slab anchored in blisters. There was over a 50% reduction in the number of tendons and a 40% reduction in the weight of longitudinal prestressing. The team also relocated the temporary PT bars used to compress the epoxy from internal to the top and bottom slabs to external so that they could be reused.

Segments. With the handling of the segments being accomplished entirely with barge-mounted equipment, segment weights up to 95 tons could be used. The original design used split pier segments. The pier segments were redesigned as a single piece that weighed 95 tons. The typical segment length was increased from 3.2 meters to 4.72 meters so that they also weighed 95 tons. Because of the 35% reduction in the number of precast segments (approximately 200 segments eliminated), PCL was able to use only one typical casting machine.

Using this accelerated bridge construction (ABC) approach allowed the project team to avoid impacting conditions of the existing environmental and Coast Guard permits, reduce the project schedule by more than three months, and save money for the client by phasing the foundation and false-work construction. To add sustainability to the project, the builder created an inshore and offshore reef with the demolition materials from the existing bridge. The offshore reef material stacked more than 60 feet high, providing a great environment for a marine habitats.